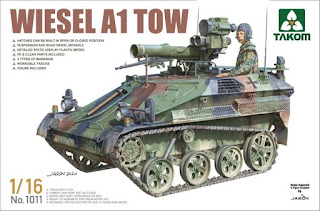 New tool!
TAKOM is a brand distributed by AMMO.
AMMO – TAKOM*
Image is from TAKOM Facebook page.
NOTE: Bold text with * indicates a link.
The Wiesel Armoured Weapons Carrier (AWC) is a German light air-transportable armoured fighting vehicle, more specifically a lightly armoured weapons carrier. It is quite similar to historical scouting tankettes in size, form and function, and is the only true modern tankette in use in Western Europe.
The Wiesel was developed for the German Army to meet a requirement for an air-transportable light armored vehicle for use by its airborne troops, as the infantry of the German Bundeswehr, especially airborne infantry, were considered unprepared to successfully fight enemy main battle tanks (MBT) in the 1970s.
The Bundeswehr eventually ordered 343 of the vehicles in 1985. The Wiesel was introduced as a new weapon system for the Bundeswehr with deliveries beginning in the late 1980s. The vehicle was named Wiesel ("weasel") because of its small size and agility, which make it very difficult to detect on the battlefield. Production of the Wiesel 1 ended in 1993. Of 343 Wiesel 1 vehicles, 210 were armed with Raytheon TOW wire-guided anti-tank guided missile system. (Source: Wikipedia).