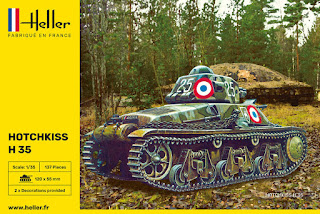 The decal options represent two tanks to the 1st DLM (Light Mechanical Division), one belonging to the 4th Cuirassiers and other to the 18th Dragons.

Images are from Heller website.
NOTE: Bold  text with * indicates a link.
The Hotchkiss H35 or Char léger modèle 1935 H was a French cavalry tank developed prior to World War II. Despite having been designed from 1933 as a rather slow but well-armoured light infantry support tank, the type was initially rejected by the French Infantry because it proved difficult to steer while driving cross-country, and was instead adopted in 1936 by the French Cavalry arm. (Source: Wikipedia).