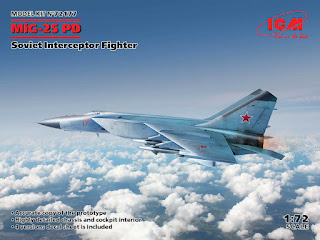 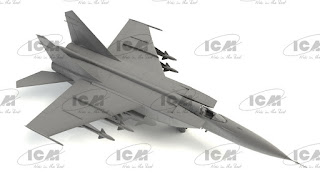 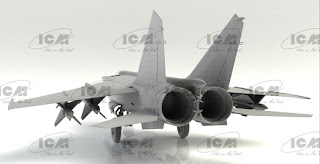 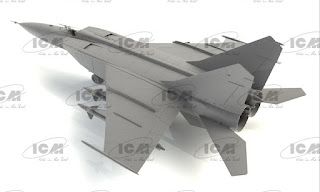 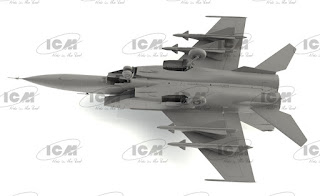 Images are from ICM website.
NOTE: Bold text with * indicates a link.
The Mikoyan-Gurevich MiG-25 (NATO reporting name: Foxbat) is a supersonic interceptor and reconnaissance aircraft that was among the fastest military aircraft to enter service and is one of the few combat aircraft built primarily using stainless steel.
The first prototype flew in 1964, and the aircraft entered service in 1970. It has an operational top speed of Mach 2.83 and features a powerful radar and four air-to-air missiles.
The appearance of the MiG-25 sparked serious concern in the West and prompted dramatic increases in performance for the McDonnell Douglas F-15 Eagle then under development in the late 1960s.
The capabilities of the MiG-25 were better understood by the west in 1976 when Soviet pilot Viktor Belenko defected in a MiG-25 to the United States via Japan. It turned out that the aircraft's weight necessitated its large wings.
Production of the MiG-25 series ended in 1984 after completion of 1,186 aircraft. A symbol of the Cold War, the MiG-25 flew with Soviet allies and former Soviet republics, remaining in limited service in several export customers.
The MiG-25 PD is the version improved single-seat all-weather interceptor fighter aircraft, which entered service from 1979. Fitted with R-15BD-300 engines and new N-005 Saphir-25 (RP-25M) Pulse-Doppler radar with look-down/shoot down capability, based on the radar of the MiG-23ML. Could be fitted with four R-60 air-to-air missiles replacing outermost two R-40 missiles. Late examples fitted with an undernose IRST. NATO designation Foxbat-E. (Source: Wikipedia).